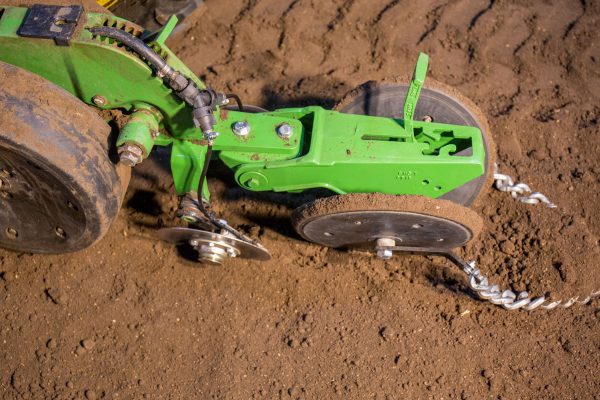 Banding nitrogen with the planter helps boost efficiency – nutrient efficiency and time efficiency. But it is critical that adding this operation to your planter pass does not interfere with the critical functions of the planter – getting seeds at the right depth, right spacing and firmed beneath the soil surface.

WE DESIGNED 360 BANDIT WITH THESE THREE CRITERIA IN MIND:

WHAT SETS 360 BANDIT APART FROM THE REST

The independent spring suspension system and placement between the row unit and the closing system means 360 BANDIT doesn’t rob penetrating force or downforce from either gauge wheels or closing wheels.

Because the open disks are flat, not concave and positioned with a compound angle that toes out, minimal soil is moved by the disks and is thrown away from the seed trench. That means, even with high-speed planters, 360 BANDIT won’t impact seed placement, seed-to-soil contact seed trench sealing.

With 360 BANDIT, the fertilizer disks are placing nitrogen shallower that other closing systems. That reduces the downforce requirements for the system while ensuring that UAN is underground and protected from volatilization and loss.

Clearance between gauge and closing wheels nearly eliminates the chances for mud build up or residue plugging.

360 BANDIT’s position ahead of the closing wheel improves the system’s ability to track alongside the seed trench on curves.

The system uses what 360 has learned about nitrogen delivery and utilizes a spring loaded flexible braided hose to slide through the fertilizer slot.

The short saddle bracket keeps the closing wheel closer to the row unit than any other rear-mounted N system. That reduces transport width and eliminates in-field issues when backing into corners and on turns.

360 BANDIT uses field proven bearings and disks – already in successfully used on planters over millions of acres. And, after hundreds of acres of use, the delivery tube and tube guide are simple and inexpensive to replace.

The 360 BANDIT design has evolved over the last five months to become a more precise, more robust and a safer nitrogen application tool. Through months of field testing, we have adjusted the position, spacing, delivery system and downforce requirements to address concerns from growers, test engineers and testing consultants in Australia and Argentina.

The result is a design that…

For 2018, 360 BANDIT is compatible with John Deere row units. We will continue to adapt and test the saddle bracket mount to accommodate additional planter makes and models in the near future.